What a glorious intersection of events this weekend contained. I traveled up to Austin on Friday for Margaret's initial birthday festivities which consisted of dinner, bowling, and karaoke at The Highball. Dinner was good and reasonably priced, bowling was great (beautiful, vintage lanes rescued from New Orlean's Rock and Bowl), and karaoke in the Xanadu room was...enthusiastically drunken? Tipsily cacophonous? The highlight for me was witnessing three inebriated lovelies blast through the birthday girl's titular song, "This Corrosion" by Sisters of Mercy. The word committed (both definitions) comes to mind.

Saturday afternoon, friends came together again for Margaret Birthday Party, Chapter II at the Carousel Lounge. Karaoke Apocalypse, whom I highly recommend, backed us up as our already raw throats were again put to the test. I feel I acquitted myself well on Heart's "Alone", but missed the mark a bit on The Cure's "In Between Days". Next time I'll tackle Devo's "Uncontrollable Urge". The band was fantastic, well-rehearsed and very supportive of the singers. I headed home early and exhausted to catch a nap before heading out that night to see one of my favorite bands, The Hidden Cameras.

It was their third time in town and I was ready to enjoy the show, but not be blown away mostly because they'd set the bar so high when they played SXSW several years ago. Still, I quickly was into it, dancing and singing along with the small, but loyal audience. After a great main set, they tore it up in the encore. For the last song, they once again pulled people up on stage to play tambourine, me included. So much fun to bang out the beat on a crowded stage hyped up on great audience energy.

Setlist:
Ratify the New
Follow These Eyes
Pencil Case
Heji/Bboy
Mind, Matter and Waste
Death of a Tune
Hump From Bending
Kingdom Come
Fear Is On
Walk On
A Miracle
Zine
Doot Doot Plot/Do I Belong/In the NA
The Little Bit/Underage/Silence Can Be a Headline

Encore:
Breathe On It
Smells Like Happiness
Music Is My Boyfriend 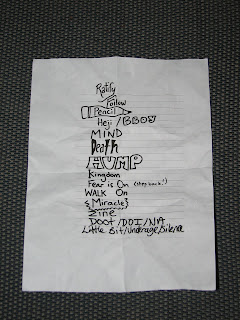 This night will live in my memory not for just the band's performance, but for a very enjoyable post-show outing that was facilitated by several very cool people. Laura, Lief, and especially John, thank you so much.
Posted by St. Murse at 2:33 PM